The Heyday of Theatre in Newmarket 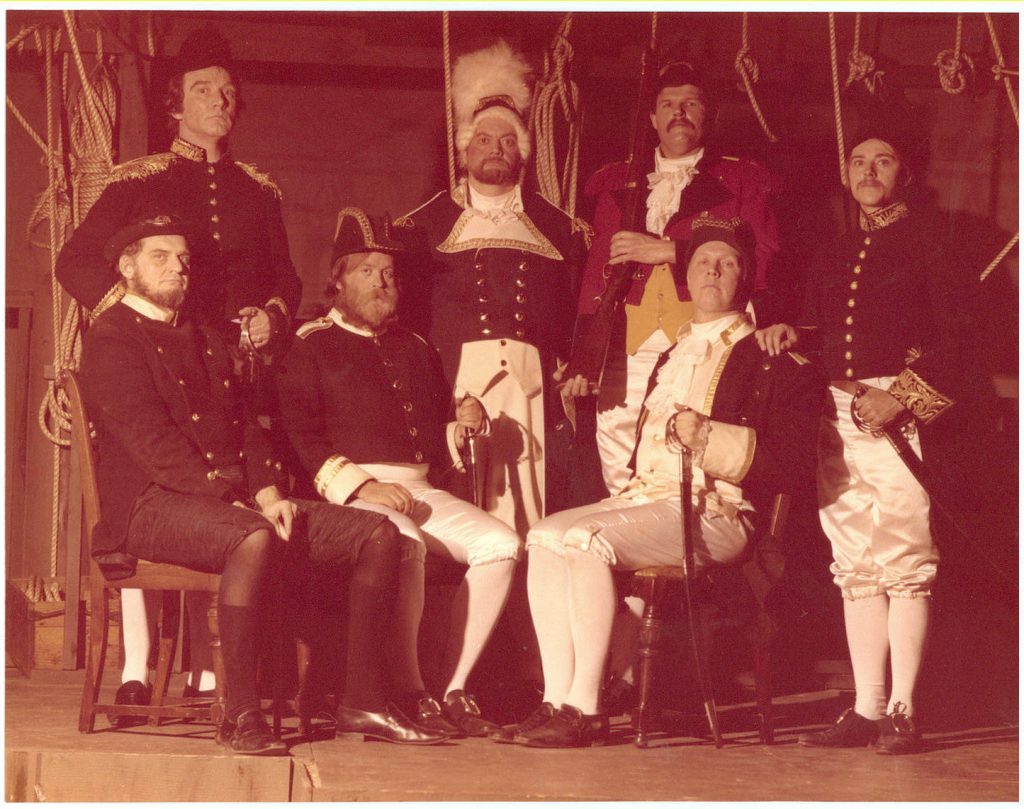 Newmarket has a very intriguing theatre history, especially in the 1970s and early 1980s, when two community theatre groups existed in town – the Newmarket Theatre Centre and the Old Town Hall Players (formed 1981). The Newmarket Theatre Centre was led by Artistic Director and renowned actor named Paul Aspland, while the Old Town Hall Players was virtually created by then Mayor Ray Twinney and resident Lynda Fraser. They was the heyday for theatre in Newmarket! Read on….Enjoy, dear reader!

It all started with the play, Separate Tables, in April 1974 by the Newmarket Little Theatre. The opening night was marred by a huge snowstorm and only two people turned up, and as Ray Burdon reported, “we managed to do one act only as one of the cast was stranded at the rail crossing in Aurora.” The rest of the scheduled shows were successfully completed. Paul Aspland, a prominent name in local theatre in Newmarket, responded to questioning: “I joined the theatre company in 1975. It was named Newmarket Little Theatre then, which borrowed its name from the last time the town had a theatre group in the 1960s and 1970s. Andy Foot had been a member of the old group and was there again when I joined. Dave Lawton and Ray Burdon were prominent.”

”Paul Aspland noted at this time, “My first involvement was Summer of the Seventeenth Doll, followed by Alfie, and Charley’s Aunt.” By 1978, the President of this theatre troupe was Ray Burdon. Plays had been and were performed at the Old Town Hall on Botsford Street in downtown Newmarket.

The Old Town Hall had been a multi-purpose building with an auditorium and a stage on the upper floor. The stage was raked and slanted towards the audience from the upstage to downstage to provide better viewing for the audience, who were seated on a level floor. In later years, it was probably the only slanted and raked stage in Ontario.

It wasn’t long before the group tried harder plays, like William Shakespeare’s Taming of the Shrew. Paul took the lead role and Christine Schillemore was the female shrew and other actors included Andy Foote, Fraser Milne, a local architect, who designed and built the set with the help of members of the company.

Paul and many of the actors were new Canadians from the United Kingdom, who had performed in amateur dramatics in England and they attracted many other expats from the UK, such as Gillian Rourke, Alan Cox, Norma Busby and Christine Hamley.

The group became decidedly English in character. Paul wrote a play, Penny Farthing Street Siege, about an older English couple who were being evicted from their home and the antics that went on inside and outside the house. John Dowson, who went on to play many roles, built the set for this production.

The next production was Billy Budd, a seafaring venture aboard an English battleship during the time of the Napoleonic War. John Dowson was the midshipman, even though he was aged 40 – He became the oldest midshipman in the Royal Navy.

Paul Aspland suggested that a thrust be built, which would extend the stage into the audience, similar to the Globe Theatre Shakespeare built in London and the theatre in Stratford, Ontario.

Keeping in mind the auditorium was a court house, the thrust had to be cleared from the room. Fraser Milne designed the thrust with a step down, so it could be stored under the stage during the court session. The plays performed were classic productions: Shakespeare’s Midsummer Night’s Dream, No Sex Please We’re British, Sargent Musgrave’s Dance, Blythe Spirit, The Miracle Worker, Tom Jones, Anne of a Thousand Days, and as the quality improved, more actors joined.

Stay tuned as we pursue community theatre history in Newmarket and the eventual formation of the Newmarket Stage Company and Very Useful Theatre Company! And the Newmarket International Festival of One Act Plays