We almost had a Theatre on Cane Parkway! 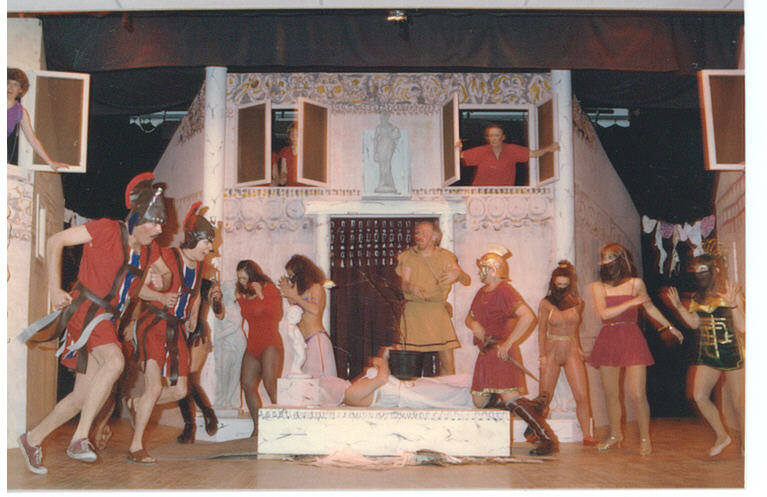 Newmarket, thanks to Newmarket Theatre Centre members Paul Aspland, Ray Burdon Fraser Milne and others, just about had a community theatre built many years ago on the Cane Parkway …. A dream of the NTC that just never came into fruition. Read on in this interesting tidbit of Newmarket community theatre history!

In 1979, Fraser Milne of the Newmarket Theatre Centre designed a theatre which could be built on Fairy Lake, off the Cane Parkway, on property donated by the South Simcoe Region Conservation Authority. A ‘Let’s Build a Theatre’ Foundation was formed and began to raise funds through donations.

Presentations were made to council. The vision was a Performing Arts Theatre on Fairy Lake with white swans with a Stratford, Ontario Shakespeare Festival setting. In 1980, the York Region court moved to their new York Region Courthouse on Yonge Street and the Old Town Hall was closed for renovation.

Paul Aspland and Fraser Milne and the foundation committee continued to lobby the town for a performing arts centre on Fairy Lake. However, with the closure of the Old Town Hall, NTC had to find a new home while negotiations for a new theatre continued. The drama teacher at Pickering College and a member of NTC persuaded the Pickering College Board to allow NTC to perform there until renovations in the Old Town Hall were completed.

A group of citizens in the area of the Cane Parkway took up a petition that there would be too much traffic to have a theatre on the Cane Parkway at Fairy Lake. Negotiations for the new theatre with council hit rough patches. As Ray Burdon explained at this time period, “I was present at a private meeting with Paul Aspland and Tony Marshall in the Mayor’s office (Mayor Ray Twinney) where he assured us that it was a done deal. When the vote was taken, the proposal was rejected.”

Town council held a public meeting to gauge support for the theatre and tourism. Paul Aspland and Fraser Milne gave the presentation with the support of one of the councillors and the director of parks and recreation. However, after a raucous meeting, the council turned down the proposal since the Old Town Hall was now ready for occupancy.

The ‘Let’s Build a Theatre’ Foundation was wound down …. The funds raised were returned to the donors and the remainder given to charity. The dream of a performing arts centre on Fairy Lake, complete with white swans, was dashed. NTC had a meeting at the old Granada restaurant and in a misguided effort to urge council to alter their decision, the NTC members voted to not perform in the Old Town Hall and they would go back to Pickering College. However, Pickering College decided to develop a drama group from their own students.

In the meantime, the Town of Newmarket had sunk a lot of money into the renovations of the Old Town Hall on the condition that it would be a local arts centre with pottery, arts school and a venue for local theatre. A large portion of the cost of the renovation was paid to the town from a Ontario Wintario grant on the condition that a community theatre group would perform in the renovated building. The Town had counted on NTC to return to perform in the building.

Stay tuned to see what happened next in the history of community theatre in Newmarket and the formation of the Old Town Hall Players!