The current status of NSC and VUTC 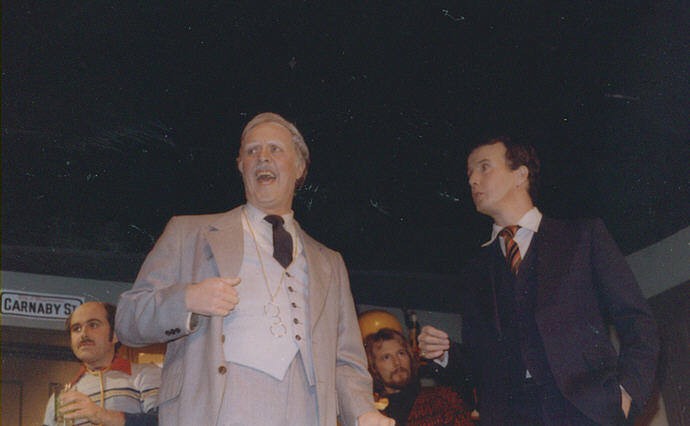 Newmarket has a very intriguing theatre history, especially in the 1970s and early 1980s, when two community theatre groups existed in town – the Newmarket Theatre Centre and the Old Town Hall Players (formed 1981).

The mandate of the Very Useful Theatre Company, formed in 1993, is to encourage, facilitate and promote performances by various theatre companies, organizations and artists, but will not put on theatrical productions of its own, unless need be, like the Newmarket International Festival of One Act Plays.

This will have the beneficial effects of promoting the performing arts and, in addition, requiring that an appropriate share of the proceeds of such events be shared with a charity, service club or other not-for-profit association or corporation serving the community. The VUTC has partnered with the Rotary Club of Newmarket the past three years in this capacity

Back to the Newmarket Stage Company — The newly-formed group applied for a new (and was able to retain) its charitable number, which helped to raise funds to help with the costs. Rick Koury, who spent 10 years as President of the NSC noted, “After amalgamation some play selections caused some controversy and the membership dropped.”

As the new Newmarket Stage Company, Noreen Aldridge directed My Husband’s Wild Desires Almost Drove Me Mad in April of 2008 still in the Old Town Hall, starring Brian Hargan and an amazing actress in the lead from Theatre Aurora, Laurie Campbell.

Before the Old Town Hall closed for renovations, the Newmarket Stage Company performed the Pantomime  Cinderella, with Emily Mathieson as Cinderella; Thomas Cooper as Button; Mark Hayward and Gregory Morton as the Ugly Sisters; John Dowson as Baron Hard-up; and Sue Meacock as Baroness Hard-up. It was directed by Ray Burdon and produced by Shelley Mathieson. Ann Cox was assistant director.

The last play prior to closing at the Old Town Hall was Wrong For Each Other in April 2009 by the Newmarket Stage Company and directed by Noreen Aldridge. The play was attended by its famed playwright, Norm Foster, who was actually raised in Newmarket. By all accounts, it was an honor to have Foster attend.

During this time Paul Aspland had taken a position as assistant director to the noted English theatre director Sir Peter Hall, CBE, at the National Theatre in London England. In 2017 the London Times declared Sir Peter as “the most important figure in British theatre for half a century”. Paul stayed with Sir Peter Hall in England for a number of years. As Paul explained, “I left in 1982 after many adventures, changes of venue (Pickering) etc. I think in all I did 25 plays…..Oh dear.”

In 2009, the Old Town Hall was expected to close permanently, but instead shut down for extensive renovations once again and the Newmarket Stage Company was forced to move to the Newmarket Theatre.

The Newmarket Stage Company moved to the Newmarket Theatre but did not have much success. There is some disagreement between the NSC and the Town, but NSC maintains it lost the bar revenue and could not get in to create sets and rehearse until the day prior to the first performance and paid a far more rental fee for the Newmarket Theatre.

These claims are disputed by the Town, who maintain fees for Newmarket Theatre were almost the same as the Old Town Hall and that the NSC did not sell enough alcohol to cover their Special Occasion Permit for Alcohol.

Despite these claims, all of these problems took a toll on the NSC’s revenues, audience and membership, not to mention morale of its members. They just weren’t drawing the audiences, their revenues were down and the group almost folded.

For the past few years, even while the Old Town Hall was still under renovations, the NSC found a home at the Newmarket Legion where they have performed a number of memorable plays over the past few of years.

The Newmarket Stage Company has built up a faithful audience at their new home, the Newmarket Legion with memorable plays, such as their initial Cookin’ With Gus, The Last Romance, Opal’s Million Dollar Duck, The Last of the Red Hot Lovers, The Ladies Foursome, The Cemetery Club, The Odd Couple – (Female Version), and most recently, The Housekeeper and Steel Magnolias.

The NSC  has on its Board: President Diane Ament, a whirlwind of a worker; Sue Meacock, a tireless worker who always acts as Producer of the plays; Peter Salt who usually builds the excellent sets; and, also the very experienced Artistic Director Teri Hallett, who usually directs these comedies.

They have attracted back some superb actors, such as Marlo Alcock, Susan Lane and Denise Kennedy as regulars, actor/director Jeff Burke, and actor/director Kay Valentine in their selection of hilarious comedies that fill the Newmarket Legion to with capacity and laughter.

And that’s where theatre in Newmarket stands today. Due to Covid-10 protocol, the NSC has presented some plays via zoom to members to stay active and the VUTC is still planning its 2021 presentation of the Newmarket International Festival of One Act Plays at the Old Town Hall May 13,14,15 2021