Live theatre returns to the stage in Newmarket !! 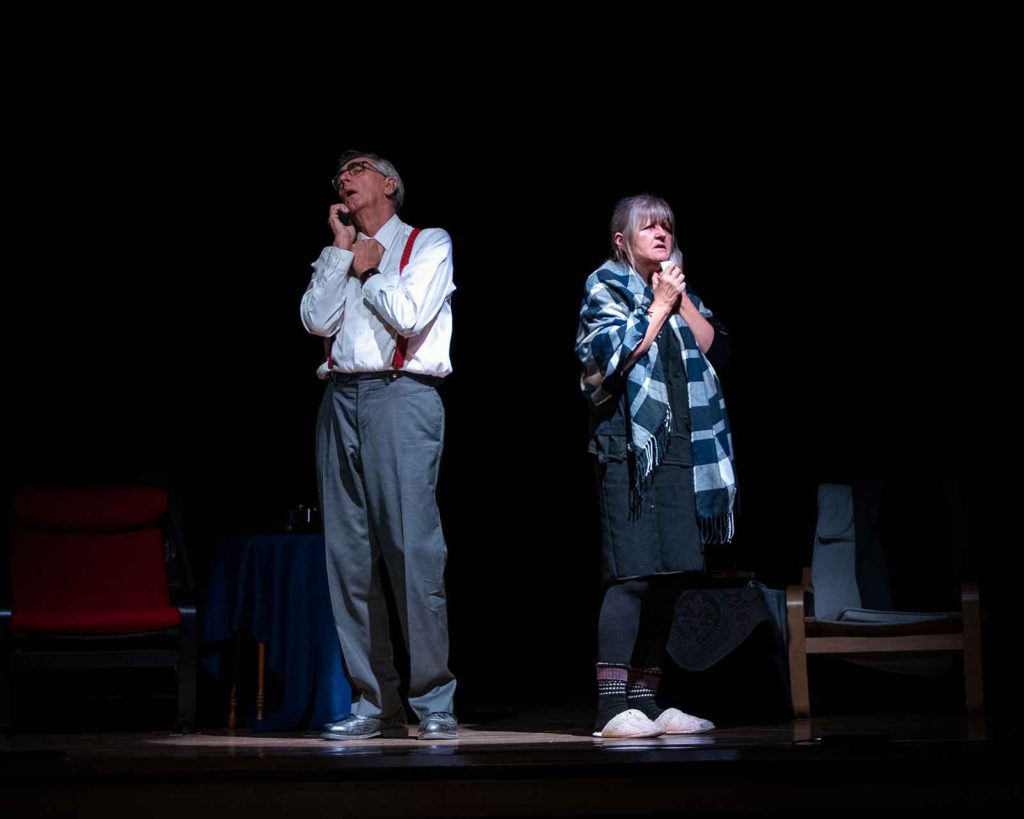 Photo by Scottie Luk
A scene from ‘Rose and Leo’ featured at the just-past Newmarket International Festival of One Act Plays held at the Old Town Hall to capacity crowds. ‘Rosa and Leo’ won the Best Play Award at this prestigious annual Festival.

The Fourth Annual prestigious Newmarket International Festival of One Act Plays was just what the doctor ordered for pandemic-weary theatre aficionados in Newmarket and the surrounding area.

This venerable Festival that ran over three nights and one afternoon on a weekend in early September attracted almost a full house every night at the magnificent renovated Old Town Hall in downtown Newmarket. In fact, the afternoon matinee by the VUTC Young Company of a theatre for young audience’s musical by a Newmarket playwright was sold out three weeks ahead of time.

And the best news is that the Very Useful Theatre Company, which hosts this annual one act play Festival, will donate a portion of its proceeds to the Newmarket Food Pantry. On top of all this, the Newmarket International Festival of One Act Plays held this Sept. 9, 10 and 11 was, by all accounts, the very first live theatre to be on stage since this pandemic began in all of Canada!

The much-sought-after Festival ‘Ross’ Award went to none other than Bruce Williamson of Aurora, who brought the play ‘The Third Life of Eddie Mann’ to a level unheard of as its talented director. This is Bruce’s second ‘Ross’ Award after winning it in the last pre-pandemic Festival, illustrating just how talented a director this Aurora resident actually is.

If that isn’t exciting enough, Arlene Murchinson-Doggart – a Newmarket actor – won the Award for Best Female Actor for her role in ‘Mourning Glory’ as a spirited Aggie. Joey Ferguson won ‘Best Actor’ for his excellent role as Angel in ‘The Third Life of Eddie Mann.’

But, the absolute Best Play Award in this 2021 Festival went to ‘Rosa and Leo’, by playwright Adam Szudrich of Australia and directed with enthusiasm by Amanda Dempsey-Laughlin of Orangeville. A Special Tribute at the Festival was given to Kira Rosenbloom of Richmond Hill for directing and composing the music for ‘Gilda: The Princess’, based on a children’s book by longtime Newmarket businessman, Ole Madsen, and also to “an outstanding group of young actors in the VUTC Young Company for their performance of ‘Gilda’.” said John Dowson, Artistic Director of the Festival.

Dowson and VUTC President Paul Bath wanted to really thank Mary Rose Talani, who directed the Canadian Premiere of  ‘The Book Club Thief’ on the Thursday night, and through her, the VUTC was able to ‘live stream’ all performances around the world! Feedback from around the planet was really uplifting for the small VUTC executive.

This was all possible through the hard work of the VUTC Web Master, Darryl Erentzen, who not only set up and managed the group’s very visible website, but also worked with Live Stream Events GTA to actually enable this ‘live streaming’.

Dowson and Bath would also like to thank, among the many, many volunteers and people behind the scenes to actually put on this massive three-day Festival, special thank you to Tom Pearson of Newmarket, of TPE Entertainment & Productions, who worked tirelessly behind the scenes as the Festival Stage Manager.

Bath also wanted to thank Newmarkettoday.ca for getting the message out on the Festival, the former Snap’d Newmarket and Shelley Dutton for flawlessly handling the tickets, and last but not least, Jill King, the VUTC recently appointed Treasurer for handling all the financials for the Festival.

The Fifth Annual Newmarket International Festival of One Act Plays is already in the planning stages for 2022. No pandemic is going to hold back this Festival, which this year actually had on stage the very best eight plays that this planet currently has to offer.